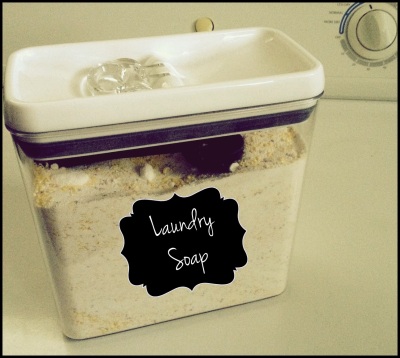 The road to domestication…I’m in it for the long haul . I don’t know whether to be alarmed or thrilled that I’m getting better at doing household things like laundry and dishes and organizing. The idea of this use to be such a snooze fest for me. Not long ago you could always find me planning my next vacation, spending $$ on yoga classes and “healthy food”, and shopping like, all the time. These days my interests have shifted as a result of becoming a wife, mother, and hopeful homeowner.
It’s not to say that I—we—won’t still go on vacations and treat ourselves to good-for-you grub or invest a little time in some moving mediation AKA yoga. But I’ve officially added all these household related tasks to my life because I’m home 90% of the time.
I like finding efficient and economical solutions to everyday stuff, so I am officially doing a laundry detergent experiment.
As a family of six, we currently spend $15 on a tub of All Free & Clear that we get from BJ’s. My guess is it lasts us about a month. I can certainly skip a week to a week-and-a-half when it comes to laundry, but now that Sienna is growing like crazy and thus eating a lot more, she’s making messes. And her mouth is like a tap. She’s a drooly little girl. But I adore that messy, drooly little face. 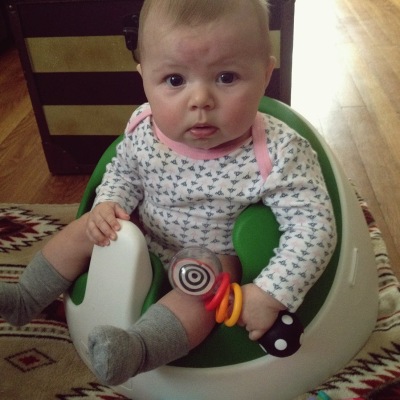 Anywho, because I do have an insatiable need to venture down the DIY path further and further, and I’m cheap frugal, I researched how to make our own laundry detergent. I figured if you look at the numbers, we’re spending $150/year on laundry detergent. Not a huge amount but every penny counts, right? Plus I want the satisfaction of not only “doing it myself” but making less trips to the store.

So back in June or July I picked up all the ingredients found in Liz Marie’s laundry soap recipe. I sat my pregnant booty down and grated three bars of Fels Naptha soap and cursed my great DIY plan as my hand cramped and I glistened sweat. It was an interesting moment. There I was, really pregnant and really hot and uncomfortable, hunched over a barrel grating the hell out of some bars of soap. I didn’t know how I got there.
I happily threw in the rest of the ingredients once that dreaded task was done and mixed it together before filling up an air tight container of the good stuff that’s about to clean my clothes. I spent $4 for a box of Borax; $4 for a box of Arm & Hammer Super Washing Soda; $3 on Fels Naptha bars; $6 for a bottle of Purex Softener Crystals that smell like lavender; and $8 for a tub of OxiClean Versatile Stain Remover. That was a total of $25, $10 more than what we spent on the All. But it gave me quite a bit and I fully expected this to last more than one month. My guess was 3-6.
Where I went wrong next was leaving the excess mixture in the barrel because I didn’t have anything else to store it all in. One day Evan sees a trash barrel with stuff in it and decides to do his husbandly duty by dumping it in the trash outside. Later, I come bouncing down the stairs to possibly do some more laundry with my lovely smelling, hand-mixed soap and gasp at the site of an empty barrel. I never told Evan about the extra detergent and where I was storing it, so he just saw a barrel that needed emptying. But HELLO?! IT SMELLS PRETTY! IT’S NOT TRASH!
When I asked him why he dumped out the trash that smelled a lot like soap and lavender, he said it was because it looked like cat litter. Never before had I seen such clean looking and smelling cat litter but whatever, I gave it to him. He agreed to buy me another set of ingredients and this time he would grate the Fels Naptha because that was the most pain in the ass part of the whole process.
Fast forward to, well, now: the end of November. A good 4-5 months since that fateful day. Of course we got a little side tracked with Sienna being born and all, and resorted back to just buying the tub of detergent for convenience sake. But then I started to get aggravated with the liquid detergent in its big, bulky container. Maybe it’s just my weird need to make laundry enjoyable but I liked using something that I concocted myself and kept in a cute container. So I decided to finally get the ingredients myself and remake the batch. This time around I only spent about $18-20 because some things I was able to get at the dollar store and I already had the Purex Crystals on hand.
I ended up sitting on my behind and doing it myself because I couldn’t wait around for Ev to do it. There would be no mistakingly throwing it away this time. I filled the container with 1/3 of the mixture and put the rest into Ziplock freezer bags. I’ve already done three loads of laundry because it is the task that never ends. I’ll be reporting back when we have gone through our supply. How exciting!

2 thoughts on “Some DIY Laundry Style”