So this would technically be my very first home-related DIY post. It certainly wasn’t a difficult or lengthy project by any means. All we did was take a door off its hinges and replace it with a curtain that I made out of some fabric from JoAnn’s. BUT IT’S STILL DIY, so I’m blogging about it 🙂

Ev and I have been living in my grandfather’s house for just over a year, so what we’ve been able to do in terms of spiffing the place up is pretty limited since 1. it’s not ours and 2. this place is old. Like storm windows with rope and pulley old. Don’t get me wrong, I love this house, but if it were mine the list of improvements that need to be made is pretty outstanding I’m not even sure I could handle it.

This is one of those moments where I wish I had taken photos of the room we’ve been occupying before we actually moved in. Let’s see how good I am at painting a picture with words… ahem… the big room on the top floor once belonged to my dad and uncle when they were kids. It still looked that way with two antique wooden twin beds, a dresser that belonged to my great-great grandmother, dusty books on built-in shelving, and an area rug nearly the size of the whole room. All of which had not been touched in… many years.

One redeeming feature of this room is the walk-in closet. It’s a beaut. 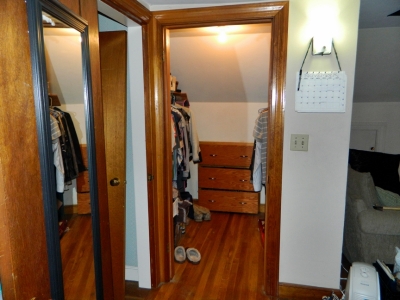 This is after we removed the door. Just to give you an idea as to why it had to go: 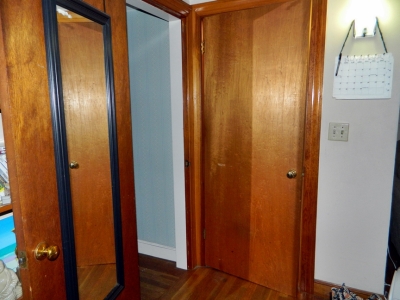 The door leading into the bedroom (with the mirror) swings inward, and the closet door swings outward. In mine and Ev’s dash to get ready for work in the morning, we’re constantly going in and out of the closet and the room and the doors just get in the way. Ev did the hard part 😉

After removing the door and the hinges, we took a curtain rod from one of the windows we weren’t using (since we replaced the blinds when we moved in) and screwed it in place. Then we hung the three yards of cool green and white damask fabric that I bought. 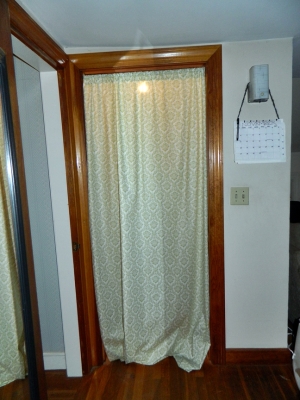 I don’t sew, so fabric tape and an iron was all it took to hem the too-long bottom. 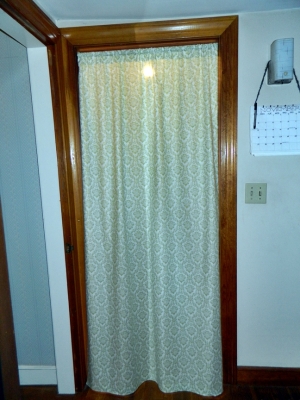 Ta da! I had some scrap fabric left over, so I used it to make a band to cinch the curtain or tie it to the side.

It’s one of the only improvements we’ve been able to make in this old house aside from ridding this room of all the old furniture and nasty area rug (it was so old that it basically disintegrated before we could get it to the trash outside). We cleaned the walls, shined the wooden floors, and brought in some of our own stuff to update it and make it ours. And now that we’re moving out in four weeks, I wish we had a chance to do more, like paint. Oh well!

So there’s the super exciting story of how we upgraded our closet. The end.